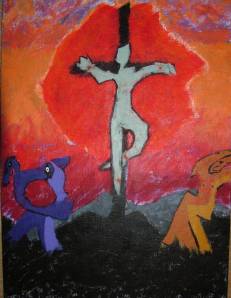 As we finish out the story of the once blind beggar in John 9:35-41, Jesus hears that the Pharisee’s have thrown him out of the temple, and Jesus goes to find him. Be sure to catch what this means. It’s not one of the scenes from the Fresh Prince of Bel Air where Mr. Banks picks Jazz up and throws him out of the front door into the yard. When it says “they threw him out”, it means that the beggar has been barred from the temple. He may not enter and offer sacrifices anymore. The Pharisee’s have cut him off from God. He has no way of finding forgiveness now. He is destined for hell.

So, Jesus goes and finds the one who has been thrown away. He begins speaking to the beggar, who doesn’t recognize Jesus. Remember, Jesus sent him to was in the Pool of Siloam to be healed. He has never seen the one who healed him. Jesus gave him sight, but he has never seen the sight giver. As soon as Jesus tells him that He was the one who healed him, the beggar believes and worships him right there. (vs 38) Notice in verse 40 that there are Pharisee’s following either the beggar or Jesus around, it doesn’t say which. Can you imagine their anger when this guy worships Jesus. He was just spanked by them, and can’t worship God anymore. Then Jesus finds the guy, and he worships Jesus. Oh, the irony of it all.

The Pharisee’s get all bent out of shape at Jesus’ remark about the blind seeing and the seeing being blind. Clearly he is implying the once blind beggar gets it, and worships God by worshiping Him. And, they don’t. He tells the Pharisee’s that by continuing to claim to be healthy spiritually, they are still guilty.

Jesus has done this with me recently. I have been struggling with some things, and under a lot of stress. I felt like I couldn’t find the answers I needed, and in my blindness and weakness, I wasn’t getting any help. I felt like no matter how hard I tried to see, I couldn’t and God just wasn’t helping. I finally got so mad and tired that I had it out with God. I admitted that I didn’t think He was going to help me. I confessed that I was mad at Him, even though the mess was mine to begin with. I basically threw myself at His feet in anger and uncertainty.

And He came to me.

He sent two friends who don’t know each other. He had them both check in with me, telling me that God had prompted them to come and ask. Both brought wisdom and healing. He came and found me, and offered me my sight back. Again.

He is trustworthy. He really is. But we have to admit our blindness and frustration. We have to be willing to fall in front of Him. But He always comes for us. Every time.

Jason is the Chief Executive Officer of Outreach Inc, a non-profit in Indianapolis working with youth and young adults who are homeless. View all posts by jasonc128