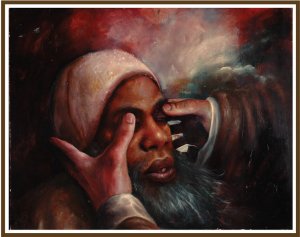 So our newly seeing friend from yesterday continues his story today (John 9:13-34). His neighbors bring him to the Pharisees because they want to know what to believe about Jesus. Now the leaders have a crowd on their hands, and the issue is being pushed on them. Who is Jesus?

They discuss it and come down to a split decision. On one hand, Jesus healed a guy blind his whole life. In verse 32, the guy claims it had never been done before. There were magicians and others who did things at that time, but nothing like this. So, you have a man standing there healed. Their belief system said that only a man who was sent by God, a pure and blameless man, could do something like this.

Their religion also said you couldn’t work on the Sabbath, the day of rest. They decided that making mud was work. Back in the Old Testament, the Jews were told to not make bricks on the Sabbath. It went back to their days of slavery where they had to make bricks all the time. So the leaders would have stretched that to cover making mud. Now follow this; Jesus knew this, and “made mud” in order to push their rules. I believe He intentionally did it to put their rules at odds with each other. Why? Is He out to embarrass them, to show them up? I’m not sure. I think it has more to do with pushing them to decide which they will follow, the rules or the sure sign of God in front of them.

You see, Jesus’ healing follows all of the guidelines for what is required of them to deem it an Act of God. There were two witnesses, the parents. The blind man presented himself to the religious leaders, which was required. Multiple people testified of the change, and the priests inspected him for themselves. It met all of the requirements. It was an Act of God. Which meant that the one who performed it must be sent by God. The healer must be one of purity and holiness. But the Pharisees didn’t want to hear that. If Jesus was sent by God, pure and holy, He had called them out and called for them to change their lives. He wanted them to give up their religion. And the making of the mud on the Sabbath was one more challenge. They were in a bind. Admit that the miracle was legit, and they would need to become disciples of Jesus, leaving their rules and religion. Deny that it was legit, and they would deny their own rules on these things, breaking their religion. It’s no wonder they hated him.

Notice too how the once blind beggar becomes more bold as the conversation continues. At first, he skirts around the questions with his answers. He doesn’t want to be kicked out of the temple, and if he admits to following Jesus, that is what would happen. But the more the Pharisee’s bounce around, the more he is willing to let go. Finally, in verses 30 -33, he lets it fly. I love that.

But also don’t miss the point. The blind guy was considered a sinner. He never had access to the temple anyway. He was an outcast already. He had nothing to lose. When we come right down to it, we are the same. When Jesus heals us, we have only gain with nothing at all to lose. So, be brave. Stand up. Speak out for the one who has healed you. He is well worth it. Leave the bickering to those who still can’t see. We have more important things to do.

Jason was the Chief Executive Officer of Outreach Inc, a non-profit in Indianapolis working with youth and young adults who are homeless. View all posts by Jason